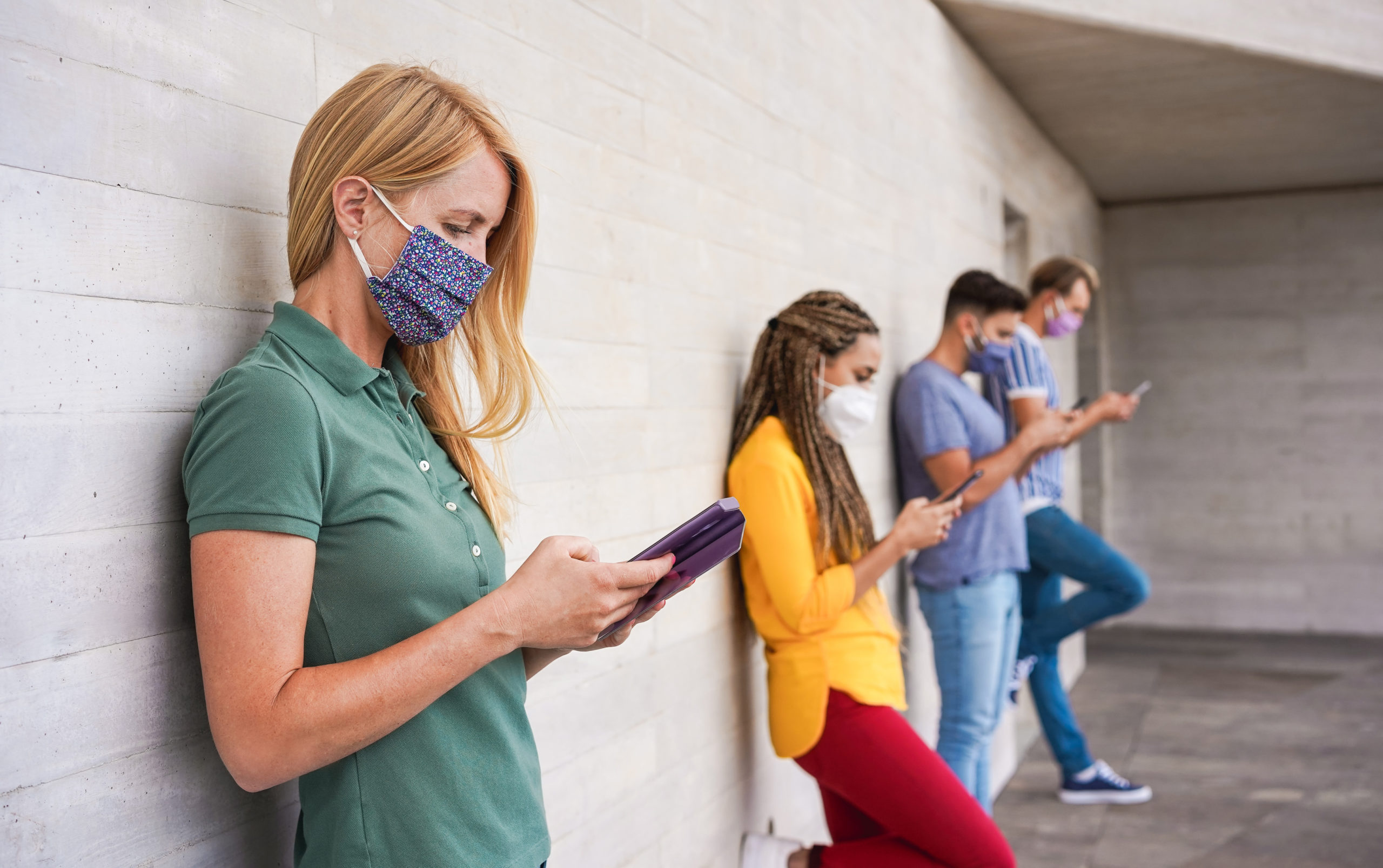 “This is another great blog from the Fuller Youth Institute on the tech world and kids. If you want more insight I recommend the book, Every Parent’s Guide to Navigating Our Digital World. The book is written by Brad Griffin (the author of this blog), Kara Powell and Art Bamford. They are key leaders in the world of youth culture and more. (FulleryouthInstitute.org)”

“You’re so addicted to that phone!”

“You can’t stop playing that game. It’s like you’re addicted.”

“Why are you such an addict with social media?”

Ever heard phrases like this from parents to teenagers—or maybe from your own mouth?

You don’t need us to tell you that mobile devices are pervasive in our culture, specifically among teenagers. Roughly 3 out of 4 teenagers own a smartphone today in the US, granting unprecedented access to and constant contact with their peers and indeed the entire world.

Concerns abound regarding this new reality. Common Sense Media released a comprehensive research brief on technology addiction among kids and teenagers. Addiction has been a buzzword swirling around young people and digital media for a while.

We’re as concerned as anyone about this at FYI. So much so that recently we updated our popular parenting resource, Right Click, to offer new breakthroughs for families’ most pressing tech-related dilemmas in a new book titled Every Parent’s Guide to Navigating Our Digital World. As parents and researchers, we agree that families need deeper understanding and more sanity around our digitally-connected lives. Or as one mom shared with us, we need more thoughtful things to say to our kids than just “Put that thing down!”

That said, we all need to exercise caution before assigning language like “addiction” to technology use. Here are three reasons why calling your teenager a technology/cell phone/social media/gaming addict might not be a good idea:

According to the Common Sense Media report, one out of every two teens “feels” addicted to their mobile device. But what does that mean? How is it defined? In particular, how do young people themselves understand addiction?

In the medical and psychological world, the term addiction refers to a behavior that is persistent, pervasive, compulsive, and that interferes with daily life on a regular basis. While we might nod our heads when we think about device usage in light of this, truthfully most of us are unqualified to diagnose addiction. Further, it’s telling that so few of us seek treatment for our kids for these “addictions.” It seems we’ve mainstreamed the term as something we don’t really take seriously.

It’s possible that our over-naming and normalizing of addiction language could actually prevent us from seeing and treating true addiction. This is a problem. It’s especially problematic because some young people are, in fact, addicted to aspects of technological interaction. Compulsive gaming and online pornography use offer some of the most evident examples. But if we call everything addiction, parents and young people will grow less and less likely to seek help when it’s truly needed.

If one out of every two teens feels addicted to devices, nearly two out of three parents feel the same way about their kids. This tells us that parents may be using “addiction” language as they talk with their kids about device usage. Especially since 66 percent of parents feel like their teenagers spend too much time on devices.

Further, about one third of both parents and teens report arguing on an almost daily basis about device use. We’re left to wonder how often that word “addicted” comes into play. When it does, how do young people feel? Have you ever been called an addict? Addiction carries a stigma, it’s shaming, and it can define someone by their behavior.

Young people are growing up in a world where digitally-connected media forms are all around them. This is the only world they’ve ever known. They are trying to figure out how to navigate that world, and they also happen to be drawn like sponges to most of what the digital world offers. The last thing they need from us is to be shamed for trying to stay afloat on the only waters they’ve sailed.

Most of the time our attention is more effective than shaming. Even when we suspect true addiction, opening with accusations is rarely effective.

3. We don’t know enough yet about how technological shifts are actually changing us.

This line from the Common Sense Media report sums it up well: “Research on Internet use and children is complicated and varied and, most importantly, woefully incomplete.” In our own research for Every Parent’s Guide to Navigating Our Digital World, coauthor and media researcher Art Bamford came to much the same conclusion after extensive literature review. We just don’t know enough yet.

First of all, very little in-depth research is conducted with teenagers or children. The vast majority of actual research on digital media has been done with adults over age 18. This is primarily because it’s much easier to get studies of adult subjects approved by research ethics boards, and parental permission is required before studying minors, so researchers tend to stick with adults when it comes to legitimate studies.

Second, this is all so new that there has not been enough time to research the long-term effects of most kinds of digital media use. Again, especially among children.

There are things we do know that apply to adults and kids—like heavy media multitasking doesn’t actually work for any of us (our brains aren’t wired for it, no matter what we might think). But there’s a lot we simply do not have research data to explore. Prematurely suggesting that technology use is going to cause any number of positive or negative outcomes in your child’s future is simply guesswork.

And like many areas of life, balance is emerging as one of the more helpful early indicators of navigating the digital world well. But you probably don’t need research to know that.

So how can we talk about digital media in our family instead?

If calling our kids addicts doesn’t help, what does?

For starters, parents can turn the mirror toward themselves and ask questions about what their own behaviors model for their kids.

How can we begin to talk about and create healthy boundaries around media use in the home? Here are five quick tips and resources you can access right now:

As parents, we are both the gatekeepers and the empowerers of our kids’ media engagement. Sure, school plays a role in ways we sometimes can’t regulate. But we often have more purview than we realize over media choices. Of course, we face the classic plea of “everyone’s doing it.” But ultimately? No, your fourth grader doesn’t “need” a smartphone. Or your eighth grader, honestly. That doesn’t mean you are a bad parent for giving them one. It does, however, mean we are accountable from the moment we allow our child to access a device, app, game, platform, or interface for what they are seeing, saying, doing, and sharing. That’s a big deal.

While we hold the bottom line as parents, that doesn’t mean we should dictate every rule and regulation in the home. The best boundary-setting around media use happens when parents and kids talk together about what a “normal” routine should look like, and then hold each other accountable. If that’s a tough conversation for your family, we’ve created a free downloadable tool you can use to have a fresh conversation with your family this week.

2. Learn how to review apps.

Or better yet, require your kids to complete this Request for App form and give you at least 24 hours to make a decision before they download anything. This brief form pushes them to do a little research on things like privacy, sharing, and personal information the app will collect. If you don’t like forms, the questions themselves can help guide a less formal conversation with your teenager.

Wringing your hands about the new games your kids acquired recently—or about how much time they’re sinking into playing? Here are ten things every parent should know about gaming to give you a leg up in this game.

Have a kid under 13 asking to use social media? Here’s an easy way to say no: the law. Read more about why, plus a handful of other tips on making age determinations and helping them join social media.

Not all kids are ready for the same things at the same time, and that’s doubly true with technology. As your kids begin to use new technology, you might find that one takes care of their device while another is careless, or one makes good choices while another struggles. Here are some tips for navigating this dilemma.

Finally, keep in mind that teenagers still typically prefer face-to-face interaction with their friends. They use social media and devices because they can, and often because they feel like they have to, but they’d rather be hanging out in person most of the time.
In other words, most teenagers aren’t addicted to media; they’re obsessed with each other. Just like always.

We can affirm the positive sides of social interaction among teens, and as parents we can work to facilitate it. That might mean intervening at times to take a text conversation to real life (“How about we invite her over to hang out with you?”) or restricting device use when kids are together in person (“For the next hour, all devices in this basket. We’re going for ice cream phone-free!”)

Finally, if you’d like to learn more about the insights and strategies we’ve shared in Every Parent’s Guide to Navigating Our Digital World, head over to our resource page for even more articles and tools for parents. We’d love to help!