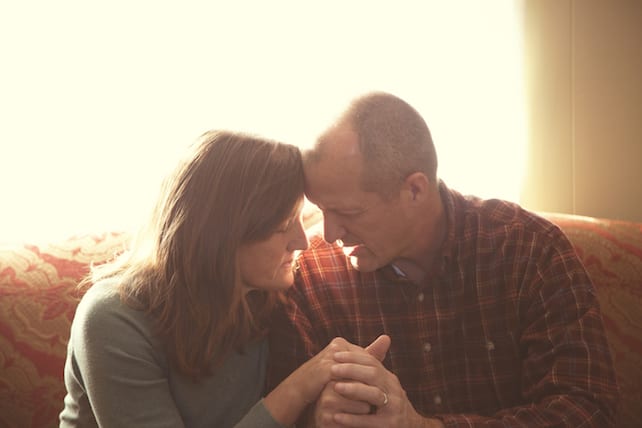 I love when research reveals great insight. I read a blog everyday called “ChurchLeaders Today.” They do a great job with practical Christian truth, news, and research. This blog is taken from their blog.

Want to Improve Your Sex Life? Read the Bible and Pray with Your Spouse

According to a new study about religion and sex life, couples who engage in faith-based activities at home (like read the Bible) and view their marriage relationship as sacred report higher sexual satisfaction in their sex life than couples who aren’t religious or who merely attend religious services together. The findings, published in the academic journal Psychology of Religion and Spirituality, are from surveys of more than 1,300 U.S. married couples, ages 18 to 45.

“Religion helps encourage people to improve their relationships overall, and a better relationship leads to higher reports of sexual satisfaction. That is really important,” says co-author Jeffrey Dew, associate professor of family life at Brigham Young University. “In a hyper-sexualized culture, sex has almost become an end in and of itself. Well, religion is one of those things that will help people improve their relationship, which will lead as a byproduct to better sex.”

The study, titled “Joint Religiosity and Married Couples’ Sexual Satisfaction,” is groundbreaking for several reasons, according to Dew and his co-authors. Previous research into sex and religion has mainly explored nonmarital sex life, and those studies that have focused on sexual satisfaction within marriage tend to define that mainly in terms of sexual frequency. In addition, most research delves into the religiosity of individuals, which “is problematic because within marriage, religion is both an individual-level and couple-level phenomenon,” the study notes.

At-Home Practices Like Reading the Bible Result in Satisfied Couples

Although attending worship services together certainly can contribute to marital unity and happiness, this study found no correlation between churchgoing and a couple’s sexual satisfaction. “There’s a little more likelihood one spouse is sort of dragging the other: ‘I am sitting in the pew with you for an hour, but I am not really engaged in this activity,’” says study co-author Brian Willoughby, also an associate professor of family life at BYU.

What proved significant in terms of sexual satisfaction for husbands is private time engaging in religious activities, such as praying together and reading Scripture together. Such activities “indicate more of a joint value system,” Willoughby says, compared to sitting in church together.

The research team, which also included Baylor University sociology professor Jeremy Uecker, proposes that mutual religious activities may increase “opportunities for emotional closeness,” which “may help foster improved physical intimacy and sexual satisfaction.” In turn, that nurtures the marriage bonds and may “shift…how spouses both think and act toward their spouse in ways that potentially enhance multiple aspects of the relationship.”

Another key point is that spouses must have similar levels of religiosity, or religious “homogamy,” in order for religion to lead to increased sexual satisfaction. “Indeed, the heightened religiosity of one partner can be problematic for marital well-being if it is not matched by the other partner.”

Another key to the sexual satisfaction of religious couples is sanctification, which researchers define as “the process of attributing divine meaning or importance to an element of one’s life.” In other words, when a husband and wife believe their union is blessed by God, who wants them to remain united, they devote more time and energy to the relationship and practice good “maintenance” habits such as conflict resolution.

The study notes: “When religious married couples view their marital union as a divinely appointed relationship, various aspects of that relationship, including sexual intimacy, may take on spiritual characteristics. This may create a sexual sanctification mindset wherein sexual intimacy itself takes on divine importance and may help couples feel more satisfied with their sexual relationship.”

It’s impossible to define—or, as scientists, to control for—“good” sex, researchers point out. But it’s possible that religious and nonreligious couples may have different perceptions of what feels intimate and satisfying. Many things contribute to sexual intimacy, Willoughby notes. “It’s not just behavior; it’s not just frequency,” he says. “It’s reflective of how we feel about the relationship.” Sexual dysfunctions or dissatisfaction may be caused by other problems with the marriage, Willoughby adds.

Researchers didn’t rule out an association between attending religious services together and being sexually satisfied. “It may be that religious worship service attendance situates individuals within a context where mutual exclusivity is more valued, and perhaps even socially enforced, which may then enhance participants’ sexual satisfaction.”

Researchers say their findings contradict the “common social narrative” that a couple’s sex life suffers if religion is a significant factor in their marriage. The study also disproves the myths that “religious couples are asexual, that religious couples are going to have lower sexual satisfaction or in some ways impaired sexual relationships compared to nonreligious couples,” says Willoughby.

To gauge their religiosity, study participants were asked how much they agreed with the statement “God is at the center of our marriage.” They also answered the question “How often do you pray or do religious activities with your spouse at home besides grace at meals?” The data comes from the Survey of Marital Generosity, which is almost a decade old, but researchers say the results are still valid.

The co-authors do admit, however, that religion, marriage, relationships and sexual satisfaction all are complex issues. Cause-and-effect associations can’t always be pinpointed; for example, a couple who’s “less sexually satisfied may also be less willing to engage in activities, including religious activities, together,” the study notes.

Sexual satisfaction, in particular, “has a lot of variables that go into it,” Dew says. “We’re not saying religiosity is end-all, be-all for sexual satisfaction. But for married couples, it’s at least part of the story.”