SESSION 3: From Linger to Launch

We’ll be talking about enabling and entitlement, and we’ll learn some practical ways that we as parents can help guide our children into responsible adulthood.

Thanks for joining us for session three of Doing Life With Your Adult Children. Today’s session is called From Linger to Launch, where we’ll be talking about enabling and entitlement and we’ll learn some practical ways that you as parents can guide your children into responsible adulthood.

Principle number four, they will never know how far the town is if you carry them on your back. I had a family come in, Sean, who had a smirk on his face, Mom who was just crazy mad and upset, and the dad who was mad at Sean and the mom. It wasn’t a pleasant initial meeting. And then what they did was they told me the story, and that Sean had graduated from college and he was boomeranged back home and he would get up about 12:00, maybe 1:00, and then he would play video games a lot of times. And then he would expect dinner and then he would go party with his friends and then he would repeat, and it was not going well. He didn’t have a job, he wasn’t looking for a job, he had no plans, whatever. And finally the parents are arguing between each other and the mom just looks at me and she says, “Sean has a problem.”

I looked at her and I said, “Actually, I think you guys have a problem. Sean has a pretty good life. You’re giving him everything.” Sean is doing great and Sean’s like move from his smirk to wait a minute here. I said, “I think we need a plan, an action plan here.” The question we have to ask is, am I enabling my adult child or am I helping them become the responsible adult that they need to become, and how do we become a part of the solution rather than continue to be a part of the problem?

And here’s the big word, boundaries. I think we have to negotiate boundaries in this one. And one of the phrases… I’m going to use a bunch of phrases… but one of the phrases I think is a good phrase is, “Well, you earned it.” It’s actually a phrase we take out of the recovery movement where you earned it. If you were involved with addiction, well you’ve earned some of these poor circumstances, but you got to let them earn it. And if they earn it for good, good. If they earned it for bad, well, that’s how they’re going to learn. We learn when we fall and scrape our knees. We’re not going to do that again. Or when you were little, you put your finger once on the burner, but you’re not going to keep it that way. So you earned it. That’s a good phrase.

The other one, and it’s a phrase I’ve used, “Experience is a better teacher than advice, so let them experience it.” Boundaries says here’s the principle, here’s the boundaries. If they break their boundaries, well then maybe that’s the best thing that can possibly happen, because honestly, your advice isn’t working. So let them have the experience, see. And then this phrase just makes sense to me. “When the pain of staying the same is greater than the pain of changing, well, then you’ll change.” Sometimes with adult children, we have to allow them to have pain because that’s when they’re going to change. Think about all of us. That happens with us, and there’s actually a biblical phrase that says, you reap what you sow, and that’s a part of negotiating boundaries.

Now as well as you’re going to help these kids launch, then you’re going to have to help them by expressing your expectations and consequences with the expectations. You do that with younger, you do it obviously in a different way with older ones. What would be basic? Be productive. So hey, rent’s free for this season as long as you’re working or as long as you’re looking for a job or as long as you’re going to school or whatever, we’re not going to charge. But as soon as you become responsible, either the rent should probably be paid, not because you even need the money perhaps, but because they need that responsibility or they could get out on their own. The other one is a very good, I believe, expectation in consequence is that you honor the moral code of the home.

Now again, you can’t run after them every night and follow your kids when they’re adults, but saying we’re going to honor the moral code of the home is a good thing. And if they don’t or if they choose not to, then they have every right as an adult to move out and then also be financialLY responsible. Part of becoming a responsible adult is becoming financially responsible. So again, here are the tasks that need to be done in a timely manner and this is what we expect. This is what we expect from you. And they should be working. Now again, it may not be the major job they’re going to have or all that. But again, that should be part of it.

Then be clear about your desired outcomes. Because if you’re not clear about the desired outcomes, they honestly may not know what your expectations are. So you’ve got to be clear. I don’t think parents are clear enough. They expect their kids to be on the same page. And as young adults they’re sometimes not. And then it’s kind of what I mentioned. Then we create goals together. Like I said, people support what they help create.

I have these two friends. Their name are Brent and Tiffany, and I kind of walked through this with them. And so they got together with their son who really needed to put some goals together, and they thought it was going to be like pulling teeth. And they said, “Look at, tomorrow, we’re going to write goals, you’re going to write goals, we’ll create it together and that’s going to be great.” And what was really neat about it was the son came to the meeting and said… had typed this out on a computer. Here’s my goals, here’s my thoughts, here’s my exit strategy, here’s what I want to see happen. And they were like, wow. Well, they got the gold star and they didn’t do it. Their son did it, but they motivated their son to do that. That was a good thing, see. And so that’s a better way of parenting than us just kind of taking care of them and wondering why they’re failing to launch.

Well, the goal of implementing each of these steps is actually to get to what I call principle number five. And that’s this. Move them from dependence to independence. That’s really the goal of parenting period. But definitely when they’re adults, you want them to move from being dependent on you to being independent. And I actually think when we do that, then we create the part that will help them launch. If not, we have a failure to launch, which again is not what we want. We want to launch our kids to health and happiness and all that. They’re not going to do it exactly how we want to do it, but that’s what our goal is.

So two important things in order to make this happen. Okay. Ready for this? This is about us. One is land the helicopter. If we’re hovering over our children all the time and we’re making the decisions for them, we’re still engaged and still involved, well, we’ve got to land that helicopter. A woman said, “I just don’t understand because my son has a great life and you’d think he’d want to be motivated,” and then come to find out, the adult son was still getting his bed made, getting a different meal cooked than the rest of the family because he had gone vegan and they weren’t eating vegan. So she cooked a separate meal, and he was getting all these things and I was like, “That’s not landing the helicopter.” Land that helicopter. And also celebrate right of passages. This is a neat thing we can do. It’s just a good practical idea.

I used to speak for an organization called Promise Keepers, and it was an organization that would speak to men, and the president of Promise Keepers always used to say this right before I would go on for some reason, and he would say, “A man is not a man until his father tells him he is.” And I would add it that a man or a woman is not a man or a woman until their mother or father tell them. But I would watch men weep because their parents hadn’t said that. Well, that’s a rite of passage that sometimes they’re not acting like adults because we haven’t given them that passport to adulthood. And that’s partly celebrating the right of passage. In fact, the Bible says this, Jesus said this. He quoted the old Testament. He said, “A man will leave his father and mother and be united to his wife and the two will become one flesh.”

Now with adults, it’s different than with kids, of course. So with young adults, maybe we celebrate the rite of passage that they’re moving away to college. Make that a big deal. Celebrate that. But they also have more responsibilities and expectations. College graduation. And again, it could be military, it could be their first full-time job, whatever it might be, but celebrate those things. Marriage. Make marriage a big deal. But as you make marriage the big deal, then it’s important to say she’s all yours now to her husband. Not that we keep our hands there. Because that gets into the in-laws and all the other kinds of things. It could be a problem. The birth of a baby, the buying of a first home. I could go on and on, but what I’m saying is parents need to celebrate rites of passages. That’s going to help their kids launch to healthy, responsible adulthood. 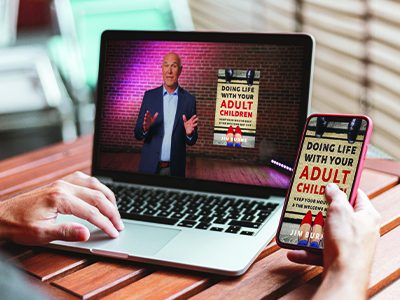