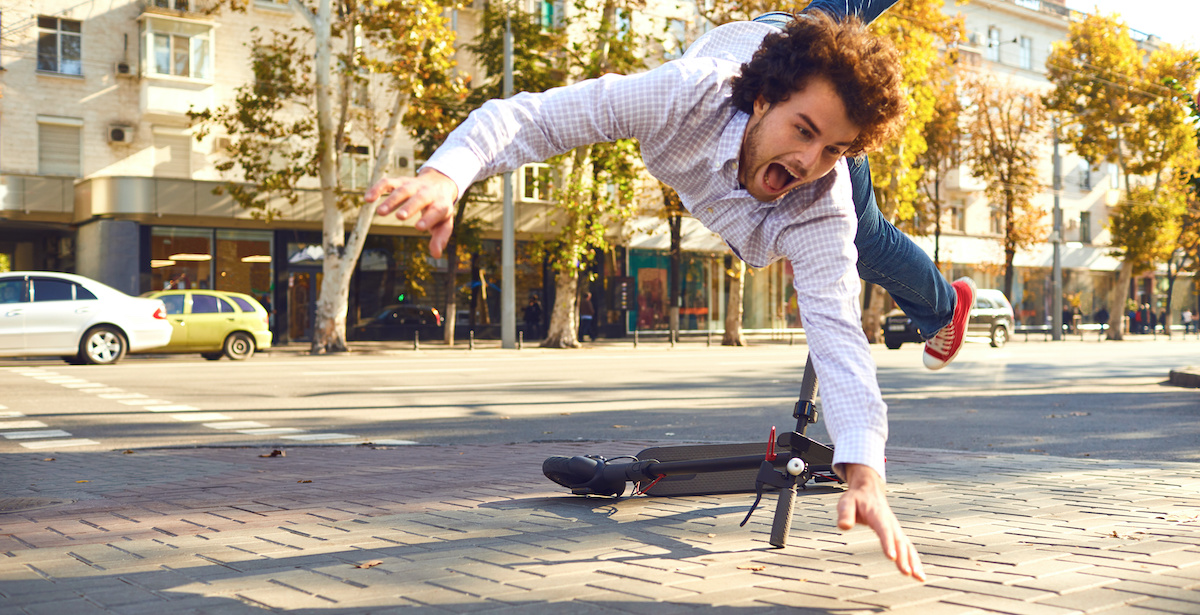 You can pick them up with one hand, as electric scooters only weigh 30 pounds. Their attraction is obvious: You can get from here to there, with no effort at all, as many have found.

Like Adam Roberts, a 50-year-old senior claims advisor living in Atlanta, thought when he used one for the first, and last time, in May 2019. It was supposed to be a 3-block ride home.

Since it was spur of the moment, he had no helmet or safety equipment. After 1 block, the wheel hit a pothole. “I flipped forward over the handlebar, landing in the street. I didn’t realize the extent of my injury so I got up, brushed off, bent my glasses back straight, and walked home. I knew I was banged up, and both arms hurt, but it wasn’t until I tried to unlock my front door that I realized my right arm wouldn’t move much.”

A new study published in JAMA, Emergency Medicine, found there were almost 71,000 emergency room visits related to e-scooters from 2014 to 2019.  Dr. Eric R. Wagner, a hand and orthopedic surgeon with the Emory University School of Medicine, also in Atlanta, told Medical Daily that “Usually there are fractures, sometimes shoulder dislocations, but it’s really common, it’s happening a lot. I probably do surgery on 2 to 3 people who have scooter injuries every month,” he said. “And that was what spurred the idea of doing the study. … the amount of people that I treated in the last 2 years with scooter injuries has just been incredible.”

Scooters – once thought of as a child’s toy – have been turned into a popular form of transportation for adults. The e-scooters can move at a maximum speed of 20 mph, so they can move alongside traffic. Cities that had become accustomed to public-use bicycles allowed private companies to introduce similar e-scooter programs in 2017. They look like fun, harmless, and environmentally friendly ways to get around congested cities, so the popularity of shared e-scooter companies quickly soared. Globally, the market was estimated at $18.6 billion in 2019. And then people started getting hurt.

What the researchers found shouldn’t be too surprising — with the increased public access, the increase in accidents began immediately. Accidents related to the scooters nearly doubled between 2018 and 2019. The most common injuries were of the head and half of those were traumatic brain injuries, which ranged from a mild concussion to much worse. Other injuries included fractures of the wrists and arms, as well as the lower limbs, and injuries to the chest and abdomen.

Dr. Wagner’s team looked at who was getting hurt and, while accidents happened to people of all ages, they found that most injuries occurred to men aged 15 to 39 years.

This study’s findings support those of prior research published in January 2020, in JAMA, Surgery, which found that most injuries occurred to people aged 18 to 34 years old.